Towards a new Dutch picturesque. Reflecting on the projects of the Landscape Triennial 2017: between the pictorial and the productive landscape.

All different projects made during the workshop suggested a wide variety of solutions to address the assigned energy problem, combined with different spatial and aesthetic qualities. We might suggest that a common theme, looking at the different projects lies in the tension between two different conceptions of the periphery: ‘The landscape as an attractive image’ and ‘The landscape as a productive field’. The identity of Holland’s cultural landscape seems to combine these two approaches into one particular image, which is also seen as representative of the Dutch culture.

Overcoming the opposition between the city and the periphery
On the one hand the cultural landscape is often seen as the counterpart for the city’s intense urbanization: As an image of calmness and harmony, completely different from the dense and frenzy environment of the city. Green fields, open horizons and undisturbed views seem to be part of a conservative image, where the landscape plays the role of the city’s counterpart. The persistence of the pictorial conception of landscape, rooted in the Picturesque ideal, still remains one of the most important ideological boundaries that restrict the thinking and practice of landscape architecture. Within the prevalence of the pictorial image, “Nature is represented by a softly undulating pastoral scene, generally considered virtuous, benevolent, and soothing, a moral as well as practical antidote to the corrosive environmental and social qualities of the modern city. This landscape is the city’s other, its essential complement drawn from a nature outside of and excluding building, technology and infrastructure”. (Terra Fluxus, p.25)

As the material produced within the workshop suggest, the contribution of landscape architecture in addressing the complexities of the contemporary urban situation has to be something more than an ideally composed harmonious image of utopian wilderness. By recognizing the capacity and the potential of the landscape as a working landscape, we may overcome the ideological boundaries of the picturesque tradition. Instead of focusing unilaterally on the landscape as a sequence of scenic views, we are challenged to think and reflect on the role of landscape architecture in a more critical way.

Landscapes potential to work as something more than a beautiful naturalizing veil, was also emphasized in the symposium after the summer school. Kathryn Moore, president of the International Federation of Landscape Architects (IFLA), emphasized landscape’s capacity to become a new driver and catalyst in the urban development. By telling the story of the HS2 planning guidelines in Birmingham, she discussed how it redefines the relationship between the infrastructure planning and the underlying landscape topography.

The landscape as a productive field: how images of technology become part of a new picturesque
The relationship between landscape and infrastructure brings us to the second conception of the landscape as a highly productive field, a source of food and energy production. This feature of the Dutch landscape seems to be over-emphasized in the spatial exercise of the summer school. The question how much load can the landscape undertake, in order to be super-productive, to cover-up for the energy and food consumption of the city, as well as for the increased demand for housing was asked many times. It seems inevitable that in order to correspond to these demands, the image, the character, the identity and the experience of today’s cultural landscape has to radically change. The question is, if this change is inevitable, will the landscape still be attractive? As an image, as an experience and as a place to live.

From the one point of view we might say that by embracing radical change, we are moving closer to overcoming the pictorial conception of the periphery and recognizing that contemporary problems need new solutions. Furthermore, the landscape is no longer approached as the city’s other, but as a field able to incorporate urban qualities. By trying to sketch a landscape in between the urban and the cultural, new, hybrid, experimental typologies might emerge, by loosing up the constraints of conserving the purity of either the ‘character of the urban’, or that of ‘the cultural landscape’.

However, the question still remains: Are we free from the prevailing emphasis on the landscape’s image or are we moving toward a new conception of the pictorial? This time we do not encounter images of mysterious forests and picturesque lakes, but of a romanticized, highly productive landscape. Vast areas of windmills and solar panels are approached as sites of strange and intriguing beauty. Even though the emphasis on a designed and approachable wilderness is replaced with a new kind of technological nature that can still work as a base for enjoyment and recreation, the image remains more than important. Should one not focus more on what conditions the installation of these devices create, what processes they generate and how they interact with the natural processes of the landscape?

Design as control over the landscape. Are we trapped in a new loop of exploitation of our landscapes?
As John May also suggests, nice images of exploitation have a larger effect than we think. “In our desire to comprehend and control life at larger and larger scales, we are perhaps unknowingly putting in motion whole regimes of mass phenomena that can initially appear natural, or at least non-human, in origin. We are somehow managing to alter the world at the level of ontology”. (John May – On Technology, Ecology and Urbanism, Verb magazine/crisis, p.112) This raises the question: Are we, as designers of the next landscape, trapped in a loop of overcontrol of the landscape? Should the capacity of the landscape be exhausted to balance the over-consumption of energy for the comfortable life of the future inhabitant of the city? Since many practices of excessive control of natural landscape processes have proven to enhance the problem they were initially trying to address, why do we keep insisting in them and try to camouflage them with a green cloth of sustainability? Is “this vague conception of sustainability as a kind of substitutive network of green technologies little more than a band-aid, a small patch on a swiftly deteriorating skin”? (Ibid, p.107) What is it that makes new “sustainable” devices of exploitation different from the rapid processes of urbanization of the modern age, often criticized by many thinkers in the field of contemporary landscape architecture?

Picture 5. Overcontrolled landscapes/ Infrastructural networks in Western Europe.
Muriz Djurdjevic & Thomas Paturet Atlas of Infrastructure II
(source: http://atlasofplaces.com/filter/Landscape/Atlas-of-Infrastructure-II-Western-Europe-Atlas-of-Places)The need to protect the landscape from processes of urbanization, whether they are given the label of sustainability or not, was also a theme appearing at the symposium. Kees Christiaanse (KCAP Architects & Planner and professor at the Chair of Architecture and Urban Design at the ETH Zurich) discussed the term of ‘Inverse Urbanism’ in the first part of his presentation at the Triennial. As he suggests, there has been a change of perspective in the relationship between nature and the built environment. While, in the past, the landscape was the ‘leftover’ of urbanisation, the Inverse urbanism reverses this balance giving high priority to the natural and cultural landscape. This approach of the city as a residual area, emphasizes the need to reconsider our contemporary, over-comfortable ways of life. “This involves less comfortable and convenient methods of being in the world, and probably more uncertain and dangerous individual lives. It involves decoupling ourselves from the crass culture of speed and efficiency that has colonized our psyches”. (John May – On Technology, Ecology and Urbanism, Verb magazine/crisis, p.110) Understanding change as a threat often leads to the problem of excessively controlled landscapes. However, what contemporary treatises of landscape architecture suggest is to embrace indeterminacy, rather than trying to precisely predict and strictly control it. As M. Prominski writes: “…with the acceptance of indeterminacy, the celebration of processes and the productive use of systemic relationships for design purposes… landscape architecture is able to deal with complex problems…. Uncertainty should not be seen as something to be resolved, but as an integral part of the design and inspire an approach more guided by time and process rather than image and production”. (Prominski, Designing Landscapes as evolutionary systems, p.30-32)

As a result, thinking of radical change is not only about imagining scenes where the image of the cultural landscape is combined with green technological interventions. The idea of sustainability needs to be seen as an integral part of our everyday practices. It is about imagining new ways of living, maybe less comfortable and fancy, but more able to accommodate change. 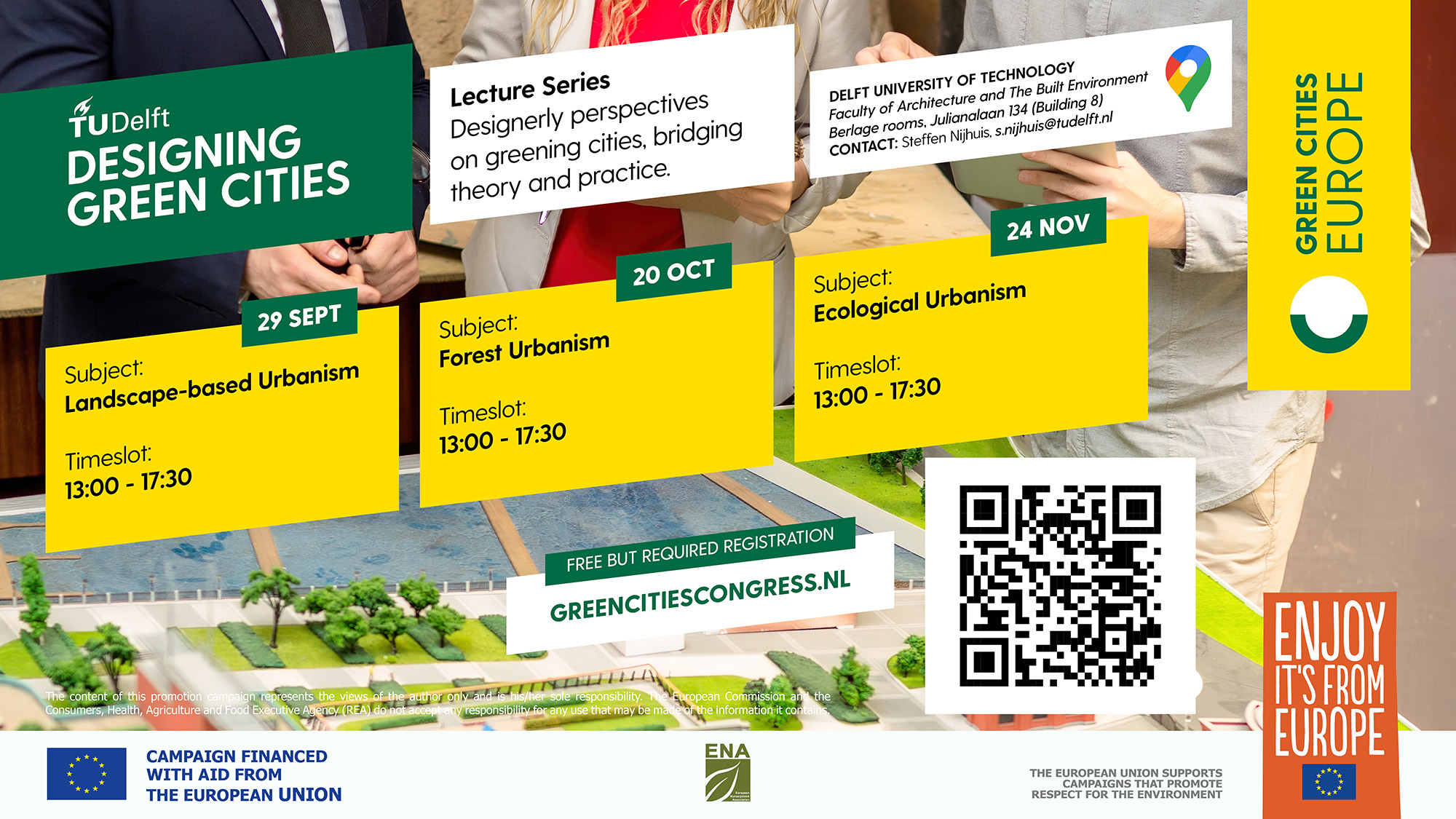